Pripyat was once a hustling and bustling town located in the North Ukraine around 100km from Kiev.
It was originally founded on 4 February 1970. It was named after the nearby Pripyat River. It was to become the ninth nuclear town in the Soviet Union at this time.
The Chernobyl Reactor was the nuclear plant that it was built to service with the plants employees and families staying in Pripyat only 3 kms away.
It was recognised as a city in 1979. By then the population was just over 49,000 with an average age of 26, so it was quite a young city. Due to the young
age and amount of families there were multiple primary schools, high schools and a college.

The life of this city was all changed on April 26, 1986. On this day the Number 4 reactor at Chernobyl suffered a catastrophic accident during a systems test.
There was a sudden and unexpected power surge during a test to see how much power was needed to keep the reactor running during a blackout.
An emergency shut-down was attempted but this caused an even bigger power surge. It is this second surge that caused the rupture of the reactor.
These events were not properly managed and due to this a graphite moderator was exposed to the air and resulted in it being ignited and then exploding.
The explosion and fire sent radioactive elements into the air and on to the neighbouring towns and regions. It travelled in the air for millions of square miles
causing other European countries to be contaminated. Belarus was also hit hard with 60% of the country being contaminated.
The main cities that were effected were Pripyat 3kms away and Chernobyl 4km to the south of the reactor with a population of 100,000 at the time.
High radiation levels caused mass evacuations from both cities A few hundred people have returned to Chernobyl but Pripyat is still abandoned due to the
high radiation levels which are too high to live in.
A makeshift cover was made quickly and placed over the reactor to trap in the radiation and elements from escaping. This has now lasted 28 years.
There is currently another one being made that will be placed over the top of the old one that is now deteriorating that is meant to last another 100 years.
It is believed to have directly  cost 31 lives of the reactor staff, emergency responders and firemen within 3 months of the accident due to being exposed to the radiation.  The workers that were sent in to clean up the disaster were called 'liquidators'. They were not equipped with instruments to measure the radiation levels and many died due to this. More lives were lost in the months and years following the disaster along with birth deformities in babies being recorded and mutations in the living.  There was also an increase in cancer related deaths due to radioactive contamination, A recent estimate put the figure at 985,000 deaths worldwide
between 1986-2004

Pripyat is now open for tours but there are still places that cannot be accessed or visited due to the radioactive levels. Most guides will also
not allow visitors into the apartments of the people once living there as a gesture of privacy. 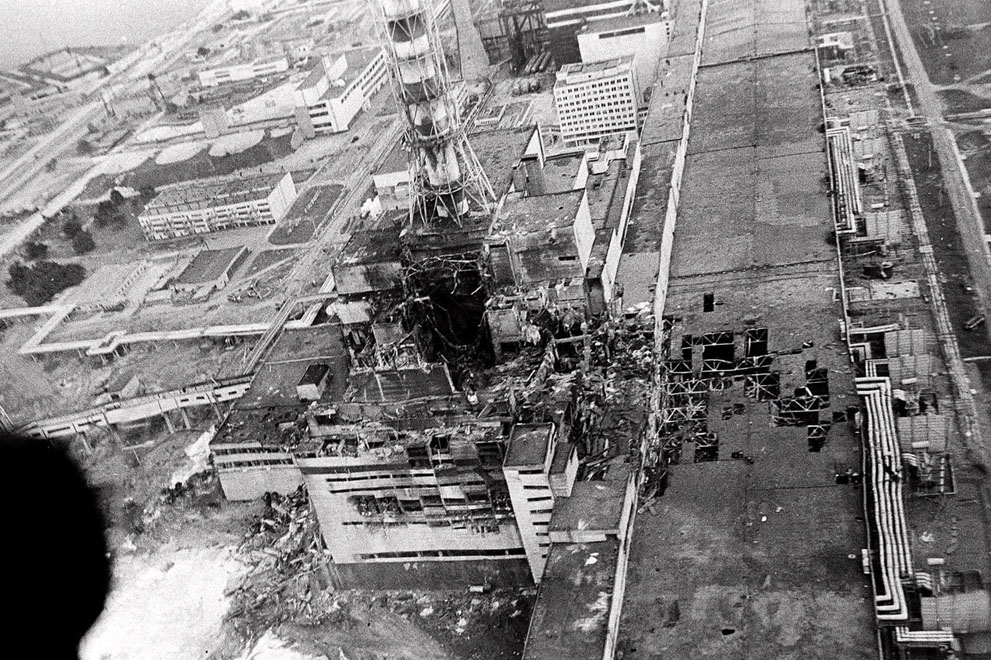 A photo taken of the damaged Reactor 4 at Chernobyl a few days after the explosion In front of the chimmney is reactor 4 and behind it is reactor 3.
Pripyat is like a town frozen in time. When the evacuation orders came through everyone had to leave immediately. There was not time for packing or taking
anything with them, they were told they could return so this did not concern them. Apartments are still fully furnished with meals half finished.
Schools show the need for the students to get out with gas masks strewn across the floors and books left where they were. Children's toys are also scattered
around the kindergarten. There are abandoned rides at an abandoned amusement park that was due to open 4 days after the disaster that sit still never used and rusting. 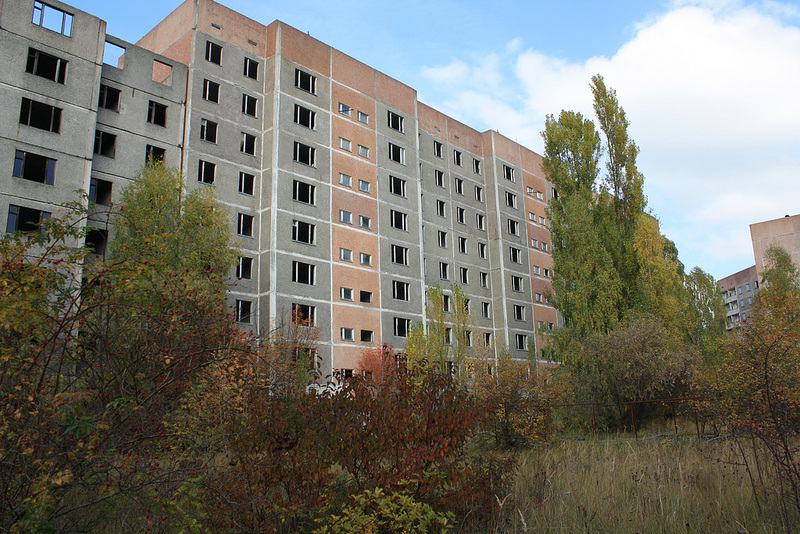 The abandoned buildings that still stand in Pripyat that are slowly being taken over by nature. 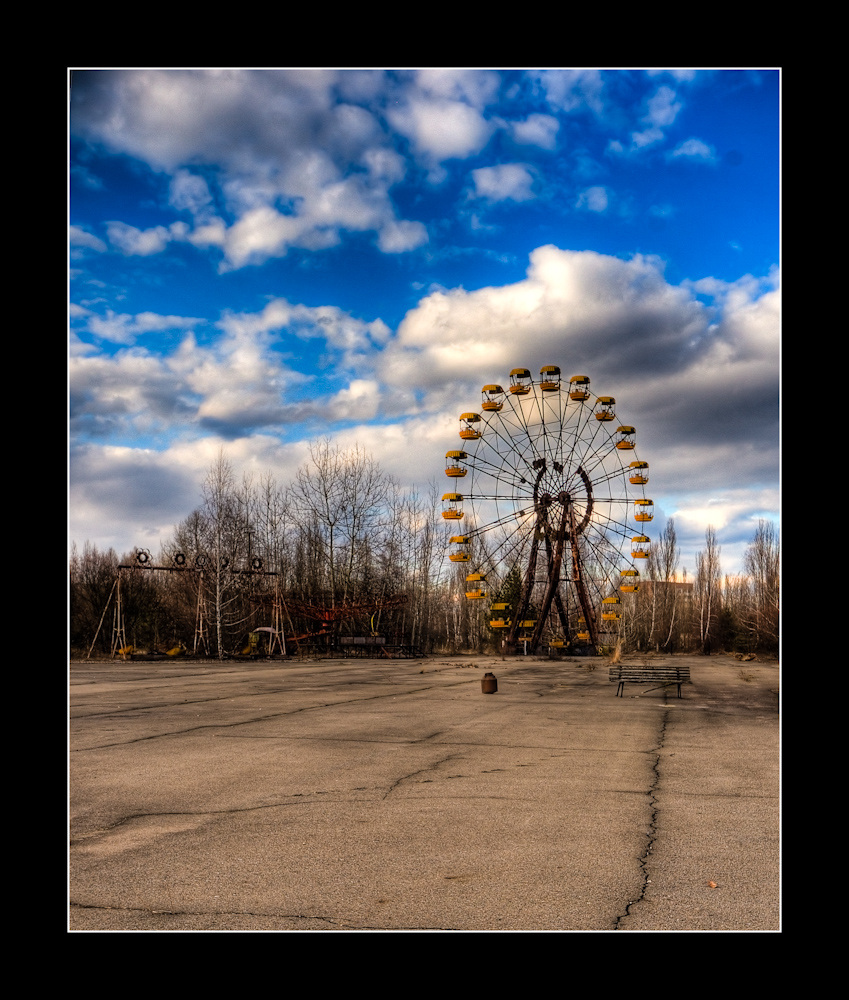 The never used but abandoned amusement park that was set to open 4 days after the disaster stands alone and rusting. 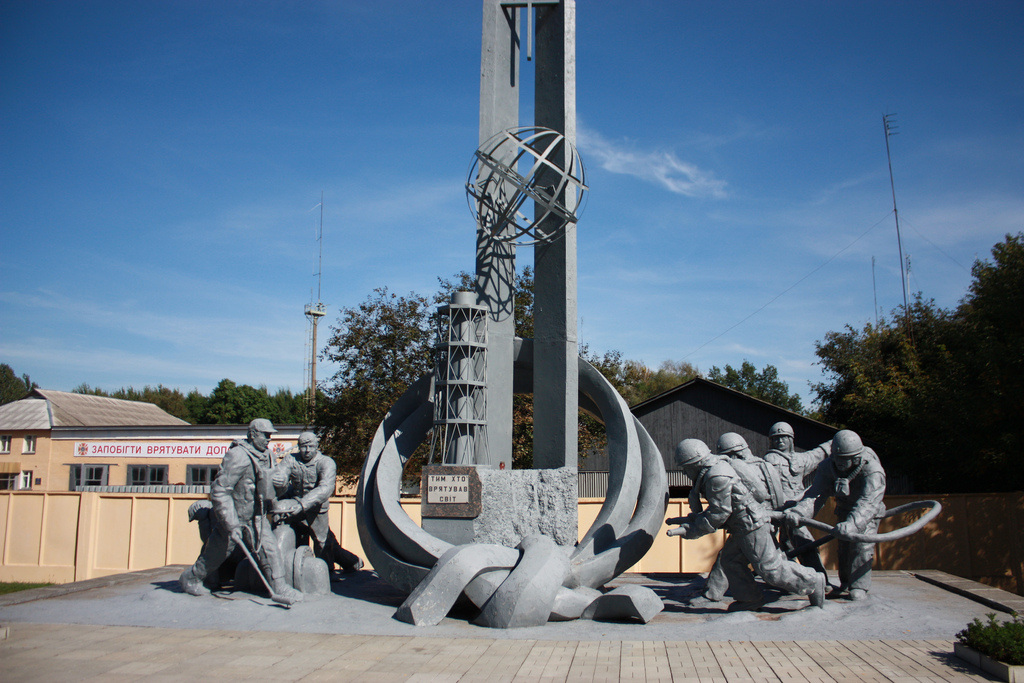 The memorial statue in the town of Pripyat honouring all the emergency responders of the day. Behind the statue there is also a doctor racing to help a fallen worker.